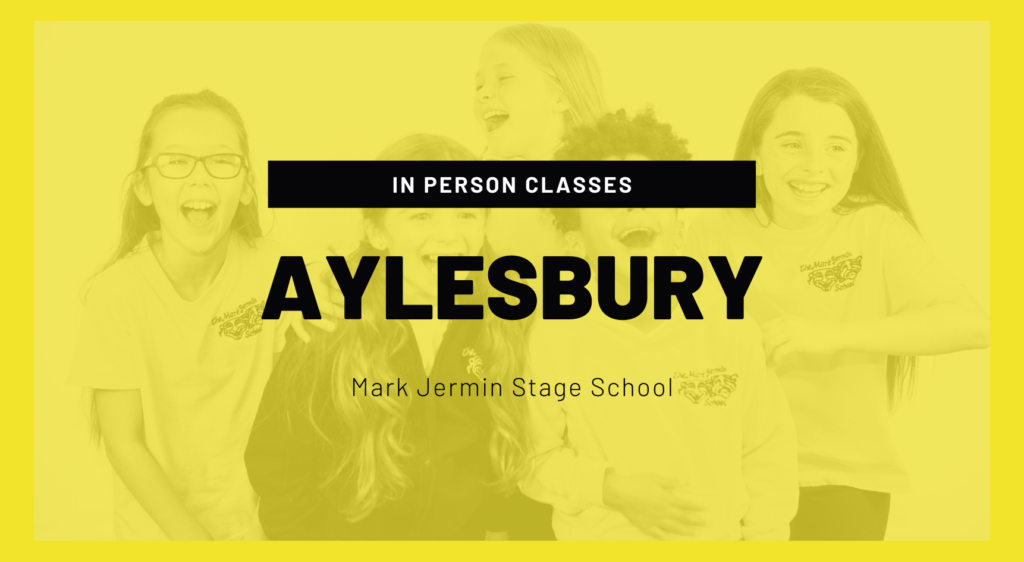 The Mark Jermin Stage School arrives in Aylesbury from  2021 led by an incredibly exciting and dynamic team in the form of West End Professionals: CRAIG and GEMMA GALLIVAN!

To register your interest or to book your place, Please complete the form below which links you to our payment page!

We are delighted to announce that the Mark Jermin Stage School will be arriving in Aylesbury from 2021!

Our In Person classes are high energy, innovative and dedicated to getting the best out of each and every individual. Through a variety of exercises, projects and performance pieces, the students gain their performance skills, develop confidence and best of all, make new friends and feel part of a unique and welcoming community.

Our tutors are always on hand to assist students with anything they need and also work with the students to design a creative and challenging class that all children find motivating and enjoyable.

In each class, we aim to explore at least two of the three main disciplines meaning each students will leave the class having developed at least two skills. This balance is determined by what projects or performances the class are working towards and also what specific areas the class may enjoy or need to develop further.

Classes will be catered in the following age groups:

Classes run every Tuesday evening.  The term will run for 12 consecutive weeks at the following times:

The Aylesbury Mark Jermin is held at:

Covid-19 Policies at Mark Jermin: At The Mark Jermin Stage School, Health and well being of our students, parents and staff is our upmost priority. All staff are trained in Covid-19 safety and prevention and we we have a full Covid-19 Risk Assessment in place. As an Organisation we are constantly monitoring the Government guidelines and working with our Venue in keeping our classes to run as normal as possible whilst keeping everyone safe. If for any reason our weekly classes are unable to go ahead in person due to a Lockdown, Restrictions with the Venue our team will adhere and deliver the classes online.

Please note that due to Buckinghamshire being in Tier 4, Classes and the Aylesbury Mark Jermin are not able to run in person. However we ask for all students to register their interest to be the first to know about the exciting and FREE WORKSHOPS we have planned online and also the EXACT DATE we officially open and launch the school!!

Gift Packages and Gift Vouchers are also available for our Aylesbury School. Please contact our team on [email protected] to request these

Sign Up to our Intermediates or Senior Classes here:

About Craig and Gemma Gallivan:

Craig started performing at the age of 12 when he was coerced into travelling to London to try his luck auditioning for Cameron Macintosh’s musical ‘Oliver’ at the London Palladium. Several recalls later, Craig was offered a part in the Sam Mendes production and in a matter of weeks was performing on the prestigious West End stage in front of 2000 people alongside Barry Humphries and Jim Dale. When the production was finally over Craig was well and truly hooked and decided to pursue a career in acting.

After racking up an impressive list of credits in his teenage years including Andrew Lloyd Webber’s ‘Joseph And The Amazing Technicolour Dreamcoat’, and a starring role the BAFTA award winning BBC drama ‘Care’, at 18 Craig landed a place at world renowned drama school RADA where he trained for three years.

On graduating from RADA Craig was launched into millions of UK homes playing Callum Watson in ITV’s hit TV show ‘Footballers Wives’. The show has since been shown internationally including throughout America via BBC Worldwide. Craig has gone on to star in numerous theatrical, TV and film productions including leading roles for The Royal Shakespeare Company and National Theatre in London, BBC’s Dr Who spin-off ‘Torchwood’ and as Tony Elliot in the multi Olivier and Tony award winning ‘Billy Elliot The Musical’, for which he was nominated Best Supporting Actor.

More recently Craig starred as Luke Morris in the hit SKY1 comedy-drama ‘Stella’, created by Ruth Jones. The show ran for 6 series with over 50 episodes and 2 Christmas Specials, and was hailed as SKY1’s most watched show ever being the second-biggest UK comedy launch in multichannel history with its debut in 2012.

In 2017, Craig took to the West End stage once again playing the lead role in another Andrew Lloyd Webber production – School Of Rock. Over a two year period Craig performed to over 300,000 people and holds the record as the longest running Dewey in the shows West End history.

2021 is also set to be another exciting year for Craig as he is set to play the much loved snowman Olaf in Disney’s hit musical ‘Frozen’ when it comes to Theatre Royal Drury Lane in London from April 2021!

Gemma started dancing at the age of 4 at the Wendy Weaver School Of Dance at Swansea Grand Theatre before going on to train professionally at the prestigious musical theatre college Laine Theatre Arts in London.

After three years training at one of the best performing arts schools in the country Gemma quickly earned her West End debut in ‘50 Musical Years of Stage and Screen’ at the Palace Theatre alongside Ruthie Henshall.

Soon after, Gemma travelled the world for Disney Cruise Lines, performing the lead role of Anne-Marie on the Disney Wonder, and has also appeared as a lead vocalist on world cruises for Cruising Musicals Consortium.

Alongside an amazing career performing all over the world, Gemma amassed a string of UK theatre credits including the UK tour of Annie, playing ‘Star To Be’ and Ronnie Boylan with Sue Pollard, plus over a dozen National Pantomimes with leading roles in Cinderella, Snow White, Aladdin, and Tinkerbell in Peter Pan.

As a director and choreographer, Gemma was a regular dance assistant for West End choreographer Adrian Allsopp, working on behalf of Production Suite and First Choice/Thompson holiday villages, as well as running her own production company staging sell-out shows in top tier theatres around the country.

Gemma’s love of performing began as a young girl in the dance studios of Swansea and she is thrilled to be passing on her extensive expertise to the next generation.

Interested in booking a 1- 1 class with the Mark Jermin Acting Team?

Booking a 1 – 1 Session at the Mark Jermin Stage School is easy.

Simply fill out the form at the bottom of this page, Follow through to the payment link and make the payment via a Debit or Credit card.

Once paid and registered, our Team will then be in touch to make convenient arrangements for your session on a day and time that is best for you.